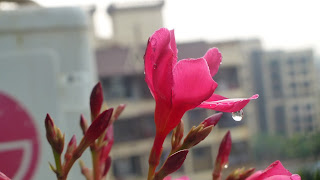 Love is a perennial theme for literature, films.music and other art forms  around the world.The Malayalam film, ‘Enu Ninte Moideen’(Yours forever Moideen)which I watched recently, is a real tribute to love. This real life story of two young hearts belong to different community, in the 50s of Kerala is exceptional in many respects, especially due to the unparallel sacrifice in the love-history of the world. Based on the life story  of Kanchanamala and Moideen, a Hindu girl and a Muslim boy who had fell in love against the wishes of their family, the film celebrates love with  its beauty and tears. I couldn’t help but think of prophetic author Kahlil Gibran’s words while watching the film as those words appears to have written for them.

“But if you love and must needs have desires, let these be your desires:
To melt and be like a running brook that sings its melody to the night.
To know the pain of too much tenderness.
To be wounded by your own understanding of love;
And to bleed willingly and joyfully’

Love was their oxygen and the beauty of their  Platonic love is both enlightening and inspiring. They breathed love and spoke the language of love which others couldn’t realize.Perhaps the spiritual depth of their love had enabled them to endure the ordeal that they had to face for that.The ultimate sacrifice of Kanchana  and of Moideen for their love in the  Kerala of 50s’ might be beyond the comprehension of today’s smart phone generation.They had to face death threat,extreme physical and mental torture as they belong to different religions. But their love had triumphed as love is the ultimate truth, though Moideen was snatched away from Kanchana in the guise of death. But even death had failed to separate  Moideen from Kanchana’s heart. She still  lives as the unwed widow of Moideen by looking after the social services he had begun for destitute women.They proved with their life that Love is a precious gift that elevates the spirit, in an otherwise immortal existence.

Love can transcend the limitations of body and its desires, Kanchana and Moideen  seemed in love through ages and life after life. Their story pained me though I was so delighted to see  two pure souls  in love. I felt a deep admiration for them  while  struggling to stomach the death of Moideen .
I left the theater with a heavy heart, as if clouds of pain burdened my soul, yet I could see  butterflies of love fluttering over me.