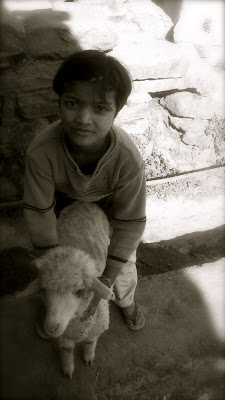 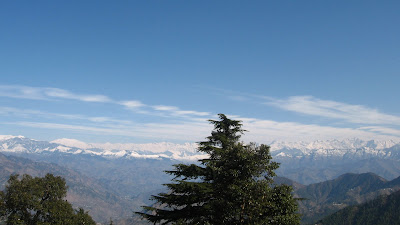 Village life always enchants me, so I havn’t thought twice when I got an opportunity to visit a village near kareri in Himachal Pradesh. It is a long walk through mountains from the last bus point to reach the place, remote but green. It is enveloped by thick forested mountains as if to guard the tiny village. There was a wedding going on to which all villagers gathered at bride’s place. I was so warmly welcomed in my friend’s home and they did everything possible to make me feel comfortable. It was a delight to see the row of traditional Himachali house made of mud and wood. I barely felt cold inside the house though it was cold outside.

It is typical village where morning wake up with men readying for their daily cores as rearing cows and plowing fields, women with cooking roti(Chapati) and aloo(potato)in the traditionl oven. They display a fair amount of hospitality and are so curious like many of the Indians; you will be welcomed to every home with a sweet chai(tea). They live with limited resources, even TV is a luxury for them. I was so moved by the innocence and love of those simple inhabitants there, especially the lovely but shy girls. I think I do fall in love with Himachal Pradesh, her mountains, apple trees, snow and her lovely inhabitants.
As Gandhiji said, 'India lives in villages’ Indian villages are very slow to changes, modernity is too shy to embrace her, tradition and social law still decides the life of villagers. And this is perhaps the real face of India in her many other faces.
Publié par Unknown à l'adresse 10:09 am 1 comment:

Shakespeare wrote, ¨Life's but a walking shadow, a poor player that struts and frets his hour upon the stage and then is heard no more: it is a tale told by an idiot, full of sound and fury, signifying nothing" (Macbeth). Perhaps the sound and fury doesn’t stop at death!Osama bin Laden’s death seems more of a tale than life- we don’t know whether to cry, laugh or forget with all the horrific details of his death unfolds before us.I don’t know how significant is the death of Osama to the world, when he is only a name sake head of Al- Quida. But obviously this is a great news for US president Obama who is seeking re-election in 2012. To an extend, USA is responsible for the making of Osama bin Laden and the fanatic elements in Islam.They prepared a fertile ground for fanatics like Osama to grow and spread their sickening idealogy among ignorant masses. So it was necessary for them to get rid of him as he had grown out of their control!

USA acts unilaterally when it feels its interests must be served-Iraq invasion, Afgan war etc are a case in point. At the same time advice countries like India to keep restraint at the face of terror! We know well that the master mind of Mumbai riot(1992) and the master mind of 26/11 are having a royal life in Pakistan, but India couldn’t do anything about that till date. US always played its game well in this part and managed to isolate India surrounded by ‘enemies’. I think, now, it is too late when the US realized its past mistake of nurturing islamic fanatism in the guise of fighting communism or whatever.

Whenever required, USA used Pakistan like a tool to slow the Indian growth in the region, unfortunately, both this countries devote a major chunk of its economy for purchasing weapons from rich counries! Why? Both presuming a war between themselves! Strangely Pakstan(read its Army and ISI),
considers its very existence is based on anti-India rhetoric and invest their time and energy on propagating hate! While those fanatics do nurture the under privileged to fight their ‘war(jihad)’, they would be enjoying all luxuries of life in the comforts of their home.I am sorry for the ignorance of common men, and how they are being manipulated.

India and Pakistan have lot of people, living in extreme poverty, many of them do not have even basic amenities in their life. Yet both this countries compete to invest in weapons to fight their war to an ‘unknown enemy! I wonder why this Asian neibhours(I am not mentioning about China that invests a huge chunk of its economy for defence purpose) are not wise enough to understand that USA or west is not going to lose anything if they fight, but only stand to gain from it. Atleast in their country, their citizens are not starving, they have a good social support system and are well taken care of.

Recently one of my friends asked me why I don't write about scams in India? It makes me sad, angry and upset to think about this-i weep for my great country.I don’t know where to begin and end with regard to this subject and I’m so tired of those new scams that mushroom everyday. Neither I do remember the names of those politicians and bureaucrats who are involved in scams nor wish to do so.( Finally am i getting cynic?)Those scamsters don’t deserve any mention of their names for they are the worst criminals in society.
But I was wondering about the tolerance of Indians towards corruption. For years, we are used to live with it and developed a kind of passive attitude about this social cancer. Whether there will be any day when Indians take to streets against our governments? India is not an autocratic country, but our democracy is nominal and is run by a bunch of political-bureaucratic-corporate mafia. Or Did the prophetic writer Kahlil Gibran put it correctly in his following words the painful truth that we live in?